How to use WinRAR for Mac OS

How to use WinRAR for Mac OS 1

In addition to builds for Windows and Linux, the WinRAR developers release and constantly update the version of the archiver for Mac OS and entitled it as simple - RAR. Considering the fact that there is no GUI (graphical interface) for this specific version of WinRAR, the user needs some knowledge in order to know, how to use the archiver in the operational system from Apple. In this article I will describe how to use WinRAR (RAR) for Mac OS and what commands you should use in order to compress and decompress the files from the archive. Let’s start!

How to install RAR for Mac OS:

How to create new RAR archive:

In general, the common commands, which you can type in the terminal, are represented on the screenshot: 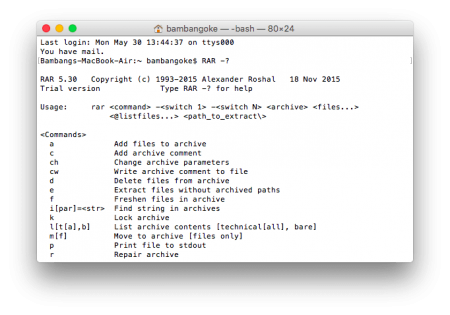 How to extract files from the RAR archive:

The logic and abilities of “unrar” command line utility are presented on the following screenshot: 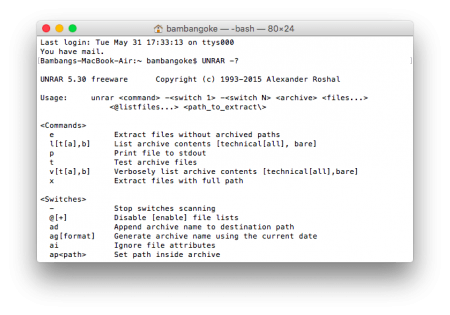 If you want to operate with RAR-archives using graphical interface, the standard RAR app won’t allow you this possibility. Instead, you may use some of the different archivers, which apply the RAR module as part of its primary functionality (like The Unarchiver, for instance). In case you choose such an app, you won’t need to install RAR separately, cause apparently this module Is included into the distributive package of such a program tool.

Hopefully, this instruction “How to use WinRAR for Mac OS” will help you to get acquainted with the archiver functionality closer.

Read more
How to open Zip with WinRAR

Read more
How to make a Zip file with WinRAR